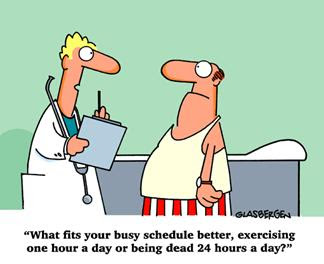 This year Valentine's Day was special for Tina and me - we were celebrating a decade of togetherness. It could only mean - gifts to be thoughtful and special.
While I could think romance and 'you-know-what'; gifted her some nice and sexy lingerie. Tina had other plans, first she took me out for an expensive dinner at a 'sophisticated' and there handed me an envelope as my gift. To be honest, I was excited and confused to see the envelope. In fraction of a second (the time I took to get my hands on the envelope and open it) - I could imagine what all could be inside that.
My mind gave me all kinds of possibilities, from photographs of Tina wearing what I had gifted her, to tickets to some exotic locale...but what I saw inside I could not have imagined in my wildest imagination!!!
I had two receipts of Gym membership in front of me. Apparently Tina realised that enough is enough and I need to get out there and do something about my body's shape (or lack of it). So she went ahead and got membership to a recently opened gym, which was just down our lane.
Sitting there at a really sophisticated restaurant, looking forward to my gift - getting weird-but-sexy ideas on seeing the envelope - well friends, I was honestly disappointed to see what Tina had chosen as our Tenth Anniversary gift.
It took me more than just a few seconds to recover from that shock. I wasn't disappointed because the 'gift' wasn't good enough or sexy enough - but because I now knew I was cornered and had no choice but to go to a gym and work out. I had never (NEVER) done it before in my life. But somewhere deep inside of me - I also knew that this was probably the most thoughtful and loving gift one could get.
Tina certainly is the fitter of the two of us, is thinner as well. I on the other hand have a non-flexi (jammed) body and am over weight by at-least two dozen kilos - thus I know it is me who needs it more than anybody else. I also know that had this gift not come along, I would never have agreed to even go to a gym!
It has just been three visits to the gym (we started on March 10th) and I feel I have joined in a lot later than I should have. I am the fattest there - feel so out of place...but Tina motivates me by saying that I have the maximum potential to lose weight and become fitter. I just hope that my motivation gets the better of my lethargy.
I promise to post my before and after pictures, once I have achieved some weight loss (assuming all of you reading this would be interested in seeing my bod!!!)
Till then - c'ya...keep reading and keep coming back for future posts. Bye!
My Valentine's Day Gift - Thank You Tina

Hey Dude...wish you all the best for your weight loss regime...
looking fwd to the pics...