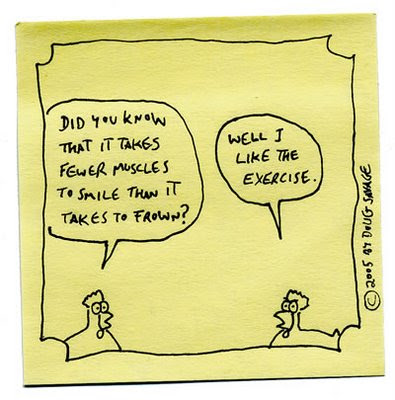 This post is going to be short and is intended to make a few people smile, since they don't do that much these days!

I hope they see this post and realise that no matter what - there isn't anything worth frowning about and that there is always something that could bring a smile...it is just up to us to see things.

I will sign-off with my trademark signature - take care and keep smiling!

Posted by Mudit Aggarwal at 12:43 0 comments

Are we doing enough - if at all?

Last evening I met an old friend, Pradeep. We were in college together and hadn't even met in the last 3-4 years but somehow remained in touch all this while. All that we knew always was - what is the other person doing these days...nothing beyond!

I knew that after completing BSc Statistics, he joined MSc Statistics (a brave one) and then joined Institute of Economic Growth, which for information sake, is not just an academic institute but a professional research and analysis organization as well. Pradeep, after spending sometime at IEG, shifted to Planning Commission and then eventually came back to IEG.

Since all this he had done in the last 3-4 years, the period when we hadn't even met - we had much to catch up on. He first tried to explain what IEG does and how do they operate - this I will not elaborate as it is available on their website. Then he went on to explain what he does at IEG and how.

Pradeep is a part of a four-member unit that manages research projects that IEG gets on Health. Under this umbrella, Health - there are various streams that are worked upon. Pradeep was talking about the latest project that he worked on - Human Development and HIV in Bellary district, Karnataka. This project was commissioned by United Nations Development Programme (UNDP).

To be honest, I hadn't heard of this district - Bellary. Then, I didn't even know that Bellary had one of the highest number of HIV cases amongst some 610 odd districts of India. And then Pradeep told me the most astonishing thing - Bellary is one of the most flourishing and well to do (financially) districts as well, in the state. It happens to be a big market for luxury items - choppers (as in private helicopters) and Bentleys are the norm for business lords. Point to note here is the term 'business lords' - it has been used to indicate that this sort of glossy image is restricted to the few who own up business there. Bellary is an iron-mining hub of India and China is a big customer. Even though Bellary is a mining hub - but there is a large portion of it that has fallen to illegal hands.

Anyhow - coming to the facts that actually lead to a high number of HIV cases in this town. From a Human Development and other general Health related research specialist's eyes - prostitution and truck drivers are normal scenarios. But the prevalence of locally acceptable bigamy and / or mistresses along with still-enforced 'Devdasi' custom - most of them practicing unsafe sex - are the major contributors to a steep growth in HIV+ cases there.

I was getting more and more interested in Pradeep's first hand story as I wanted to reach to its end and understand - "so, after studying all this, after seeing all this - what do you guys propose and what do you guys think will happen for and in Bellary?"

This is where I sensed the first signs of frustration showing up in Pradeep's voice and words. Till now - he sounded excited about his line of work, he sounded concerned about what he saw and observed in Bellary - but now - another emotion...FRUSTRATION!

He was honest enough to say, "look, all that IEG is supposed to do is conduct a research, analyse data - set it against a hypothesis and prepare a report with suggestions for improvement. Beyond this, it upto the commissioning body (UNDP in this case) and the policy makers (local and central governments) to do anything with this report." This statement in itself told me that in his not-so-long career he's already seen this happen on more occasions than he would like to.

His supervisor - a seasoned economist and research specialist tells him to cool down. Explains that this is the fault of 'your-generation' as you guys want things to happen quickly and the results to come out even quicker. In all this, Pradeep puts up a brave front and believes that if people and organizations working on such projects - all start questioning the reason and result of any such research, then probably there wouldn't be any progress. It is a question of someone doing something, even if that effort doesn't bring out the best possible solution(s).

I, in some sense, agree with him. It is after all the easiest for me to do. I can agree that yes, IEG and other such research bodies or even organizations like the UN should conduct such programmes and think about how to improve the situation. But - the question that has been troubling me is - can I do something?

After pondering over it for one full night - another question cropped up - DO I WANT TO DO SOMETHING ABOUT IT???

The answer is a feeble YES!

Well, honestly - it is a yes but I use the adjective 'feeble' to it because that's what it is. I want to do something - there is no doubt about it. But is this feeling strong enough to make me get up - book tickets to Bellary and actually go there to experience what Pradeep had told me. No, it is not. This yes is true only to the extent that 'doing-something'about-it' does not upset my daily routine in any manner, it does not make my mind run away from my regular responsibilities and does not pose a hinderance in my personal growth and development.

So - here I am doing my bit...I have tried to bring this issue out through this post as I could not see any quicker way of spreading the word, than this. Just as the cartoon you see at the start of this post - I am doing community service on the Internet!

I thank Pradeep to have exposed me to a scenario that I had kept a blind eye towards, believing that ignorance is bliss!

Are we doing enough - if at all?

Posted by Mudit Aggarwal at 17:06 2 comments 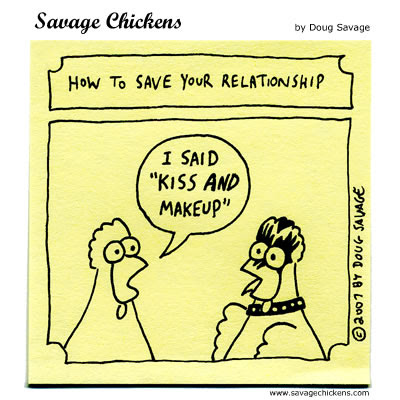 In his latest book, Chetan Bhagat has touched upon an interesting piece of information that I think is worth sharing. It is about chimpanzees, but makes a lot of sense for us, humans, as well.

As Bhagat writes, in a group of chimps - male of the species would fight amongst each other over food, women, wine (that's my contribution) and anything else worth fighting for...but at the end of it, no matter who wins or loses - they would kiss each other on the lips and make-up...yeah, kiss and make-up! Well, Bhagat also mentions that this is done to ensure that no matter what reason was for this fight, in the end - they all belong to the same group and this should not get in the way of their otherwise loving relationship!

I came across this and thought that if chimps are clever enough not to carry on their grudges, why can't we try and do the same. It may sound weird at first - because reader's mind is still stuck on the aspect that male chimps kiss each other on the lips...but try and read more into it. Think about it - would it not make a difference if we could just kiss (the person we are allowed to kiss) after any fight / skirmish - if we could just manage to tell that look let's move on...would this not make a difference immediately.

The point here is simple, please decide - are chimps smarter than us or are humble enough to forgive!

Posted by Mudit Aggarwal at 16:36 0 comments