Should One Get Married? 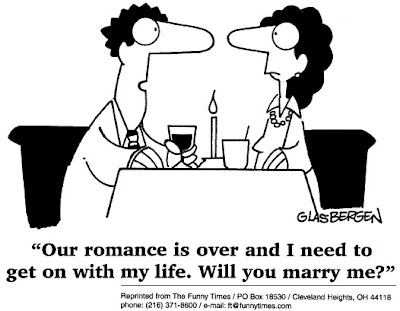 After ages I was speaking to some of my old colleagues, whom I had worked with in my first job and probably hadn't been in touch for over 4-5 years...most interestingly, we were 4 friends on a con-call. From a marital status perspective, 3 out of 4 were married guys in the group (including yours truly). Then, in the middle of reliving our past when we used to be younger, care-free, thinner...the unmarried guy drops a dead serious question: Should One Get Married???
This one question changed the course of an otherwise normal "hi, how have you been" discussion to nearly a debate. Two of the three married guys came up with a near whole-hearted "yes" to this question, while the third said a firm "NO". I am that third person...
There are almost all reasons under the Sun that would make marriage nothing but a must-do for a couple in love (I am assuming this question is relevant for people who have an option of either being married to someone they love or just be with the person they love). Let's look at a few that would top the list of reasons:
1. Love...I want to be with the person I love for the rest of my life...
2. Security & Stability...I know this person will be there for me through thick & thin - this person would accept me as I am...
3. Companionship...I don't want to be alone and lonely, I want to share my life - my joyous moments and my moments of sadness with someone
4. (At-least in India) Societal permission to have sex...I am married now and can have sex...whoopy!
5. Societal acceptance as being normal...if I am unmarried after a certain age, "what's wrong with me"
6. It's LEGAL...I would have legal rights, my kids would be legitimate
These reasons have been picked from thin air and I do not claim these would definitely be the top most reasons. But, to me most couples (married or those who want to get married) would have at least one of the above in their top-most reasons to marry.
OK - now: if we for a moment keep the society out of the picture and still include other personal reasons to marry...think, what would be the reason that would compel us to marry! Really, what does marriage bring to the table that a couple cannot have outside of marriage.
If I am in love with a girl, want to spend my life with her, share my life with her...make her my life partner and on top of that...also know that she feels the same...then, why would I only manage to have all this by marrying her! Would my not marrying her make me love her less over a period of time, OR would I be ever-concerned that her love might!
Post-marriage, even for people like me - where the courtship period was 9 years, there are some adjustment issues. There are a few more disagreements than during courtship days (and years)...the point is - people say, when you are married, you marry the good and the bad. Are they saying...if I love this girl and am ready to live with her...the only way I will be accepted in totality (and vice-versa), i.e. the good and the bad in me...if I marry her. Hell...love has nothing to do with it. It all boils down to some ceremony, some certificate...anything that can prove we are married!!!
Concept of marriage is much too old (even Wikipedia doesn't have a date of it's origin)...and I do not intend to question it. I am just laying forth a point here...marriage is a societal concept, it satisfies the society, whether in a civic sense (by controlling promiscuity) OR in legal sense (in case of rights of spouse over girl-friends / boy-friends and inheritance for children). It in no sense promises or assures one about the first three reasons as mentioned by me. And, in the same sense, it may not promise or even assure deliverance of few other personal reasons that one may have to want to get married.
I am not anti-marriage...not at all! I have been married for three years now and I think me and my wife are doing good for each other. But - when this question is posed to me...Should One Get Married...my honest response is...you don't need to, if you can live without social acceptance.
Should One Get Married?