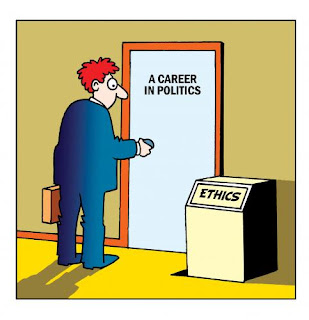 There is some definition & boundary of ethicality that is known to me, but I can neither accurately define it nor mark out everything that lies within that boundary…essentially, I don’t know what my ethical standards are, and where my ethical standards end. Yet, I believe myself to be an ethical person – furthermore, I believe I am more ethical than the average person. Interestingly, this is still not the complete truth, or the truest account of how I see myself when ethics are concerned. In my mind, I truly believe I am an ethical person, who does almost next to nothing that is unethical.

There is a reason for my giving two versions of how I see myself when ethics are concerned – I have recently completed reading a book: Blind Spots. This book has pushed me to think deeply about the concept of ethics, widen the definition of unethicality and see myself with new found understanding of ethical & unethical.

This blog post is not about the book, i.e. this post is not a review of the book. All I will say about the book is that it is a must read for everyone who: a) has any interest in the subject matter (ethical / unethical – decisions, behaviours, attitudes), and b) is willing to challenge herself / himself on this, rather, sensitive issue.

While reading the book, I could identify and understand the many reasons why I believe I am / was an ethical person (at the very least, better than the average person). More importantly, I could identify and understand reasons why I am / was mistaken. Not only did I question my own decisions and behaviour on the parameters suggested by the authors of Blind Spots, but also, I questioned some of my basic life-approaches.

Through this blog post, I wish to discuss two parameters that seem to make a lot of sense as life-approaches (whether for the sake of ease of life, or keeping a positive attitude), but indeed cause inherent unethicality that goes unidentified, ignored or worse – justified. As is the purpose of the book, so is mine with this blog post – not to term anyone, and most certainly not myself as unethical – but simply to question how & why our self-belief about our own ethicality is flawed. I merely am trying to add judgement parameters, to come closer to whatever may be the actual boundary that clearly separates concepts of ethicality from that of unethicality.

First - Men can and do think as if their life (and people in their life) was divided in clearly defined, separate compartments. One crude & extreme example can be - their work-life and colleagues are not the same as their friends in their personal life. This compartment-based approach makes things simple for men – almost like, “what happens in Vegas, stays in Vegas”. This is a tool that allows us to lead a simple life, because it requires less thinking and less justification of our actions / decisions.

Second – the gaining popularity of “live in the present” concept. People have been under such levels of stress, by thinking and worrying about the future, that living in the present had to be promoted to relieve some of the stress caused by uncertainty of future. Although I agree with this philosophy, and to a large extent try to live by it – Blind Spots raised some pertinent questions, which now make me believe this philosophy has the capacity to make people give a blind-eye towards the issues of ethicality.

By not mixing / sharing personal and professional lives (or any other form of compartmentalisation) and / or living in the present – one may ask: why does it raise questions of ethical nature?

To understand the answer – we must deepen our understanding of what is ethical and widen the boundary of what is unethical (. Authors of Blind Spot tried to simplify this – think of 2 things:

2  b) “what will my mother say” – I found this to be a simple & honest check of boundaries where ethicality ends, and unethicality begins. If my mother won’t be happy / proud, or worse still is expected to be unhappy / disappointed by our action / decision, then we know there is something inherently wrong.

Now let’s apply both these tests to the two blind spots that I have raised.

If one leads life in compartments – then there is some element of life that is not shared with people that matter (family, better-half)…I consider sharing, and honesty to be “should do”. By not doing, we are being dishonest, trying to hide – although all this may not mean cheating, or worse, yet it is dishonest. The fact this is dishonest, it should not be done – and thus is an ethical issue.

On the same note, since it is dishonest, it cannot be condoned by my mother. She may understand my point of view, and reasons for doing so, but she would never accept this as the right thing to do. Once again, we see that living life in compartments leads to issues related to ethicality.

For living in the present, consider the way we treat Mother Earth and environment. Personally, having lived a typical middle-class life, if in future I can afford a car of my dreams (even if it is a fuel-guzzler), then I would gladly buy it. I would want to live the life that I haven’t lived in my past, fulfil my material wishes today and not bother about the future – whether my own, and more so that of future generations.

Let’s change the example – if I lived a life that had only one-night stands, no steady relationships, no lifelong partnerships, I would be living in the present. To this – my mother definitely won’t be happy. Once again, it raises issues related to ethicality.

I accept that both, definition of “should do” and “mother’s approval” would differ for from case to case. However, what I have come to realise is that such theories and concepts work on average – what should an average person do, or what would an average mother approve of…and as always, there will be outliers or exceptions to the rule.

The whole idea of this post was to - first, share the concept that our own image of ourselves on ethics may be flawed, and second, add two more judgement parameters to various that have been talked about in Blind Spots. Nothing more and nothing less!