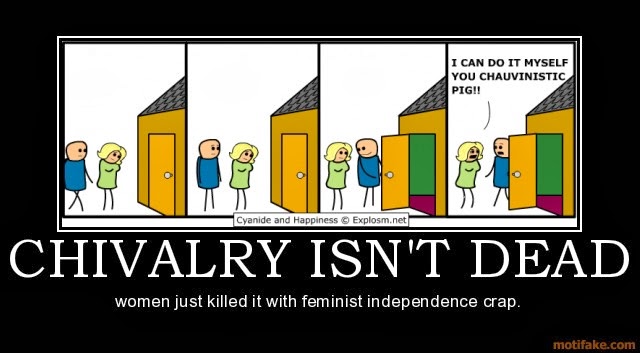 Even as a child, looking at my father, I knew women were special - to be given special treatment and special attention. He taught me small things, by example, to open doors, to be towards traffic when walking together, to pay for meals...and more such similar acts. At that time, I didn't understand chivalry - but understood that women were somehow special. I worked hard at practicing what I was learning, developed these actions and made them part of me much before I even came across the word 'chivalrous'. Soon after being introduced to chivalry, I learnt two more terms - chauvinism and feminism... 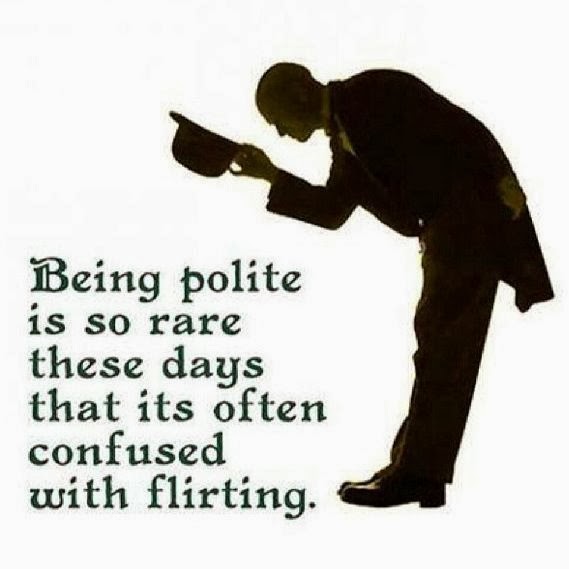 There is some common ground between chivalry and chauvinism - men and women are not the same, thus not equal. The actions depicting either chivalry or chauvinism - both support this...one tends to put more respect for women and the other does this a lot less. But when we try and see through smoke screens (created by positives of chivalry and negatives of chauvinism) - we can't deny, both these suggest one thing and one thing only: men and women are not equal! I now further believe that all chivalrous men are chauvinists as well. I don't think these two are mutually exclusive - just that each individual man has different degree of chivalry and chauvinism...which ever quality is over-powering the other, shows more often.

The wave of feminism started decades ago...it talked of liberating women from oppression and showed them the path of self-actualisation. By definition - feminism demanded equality of sexes...that men and women be treated equally - at the same level in every sense. Women in their zeal to become 'equal' to men have definitely ensured that they are more prominent now, given 'equal' responsibilities & opportunities and probably got an 'equal' status in society as well.

My problem with this is - I have always thought of women as special, thus better than men...why would they want to become my equal?

In my view - here lies the bigger problem. Chivalrous men were first to be converted by concept of feminism.  Women were becoming 'equal' to men - they didn't want any special treatment. Women started fighting off all and any treatment that said "you are different". Simple acts of chivalry were looked with a skeptical eye and often rejected. Soon afterwards started doubting chivalrous acts as those with an ulterior motive.

There was such an overload of 'equality for women' that the men who thought of women as special, started to question - "what is so special about women?". In due course - chivalrous men took a back seat...told themselves that women are equal indeed and thus, special treatment is unfair.

On the other hand - the chauvinists were being challenged as well. They didn't like to be pushed to treat women as their 'equal'. These men had to change - since legally and morally society was changing. Women were taking on more than they ever had...doing a better job of it as well. This resulted in resentment in chauvinists' mind, widening the feeling of inequality that existed earlier.

Are women better off today? I definitely believe so. Feminism did deliver on its basic promises - provided equality - a platform for women equally shared with men. But if I am asked - were the feminists targeting reducing chivalry or chauvinism and if that has been achieved...on that account, I sadly believe feminism hasn't had a favourable outcome. Reduction in chivalrous men and rise in chauvinistic men - how can this scenario be good in future? Time will tell...probably via another movement - oneism!
Feminism Reduced Chivalry...Not Chauvinism!