I have no doubt in my mind that last 10 years have been the best for men's tennis - the complete domination of few, the fierce-yet-egg-me-to-perform-better-competition between these few, the single mindedness in these few to perform their best, the very best they are capable of...in 28 years that I have been following tennis, I can't think of any other era where the world of men's tennis had such greatness!

With Roger Federer, Rafael Nadal & Novak Djokovic - men's tennis has become age-proof...they have the class to give glimpses of tennis that used to be, for today's oldies and they have the aggression & style to be attractive to watch for today's generation. I would like to repeat: in my opinion...the last 10 years have been the best for men's tennis. 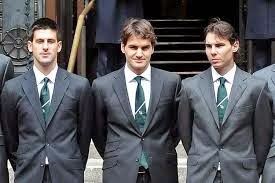 The fact that 2 of these 3 have already completed their career slams and the third is short of just one to complete his - shows just how this era has been (only 4 have achieved this in the open era - first managed in 1969, the second managed in 1999).

To put things in perspective, 36 off last 42 grand slams were won by one of these three players and the remaining 6 slams were shared between 5 players. That's just how strong these three have been. Compare this to the previous 42 grand slams, men's tennis had 19 champions...

I don't want to come across as saying that any of the previous grand slam winners - whether single grand slam or multiple slam winner, were not good enough...all that I want to say is that these three players have given a completely different meaning to the term - 'champion'. They are not just championship winners...they are champions in the true and complete sense. A champion isn't just a winner...a champion dominates, is revered and feared by other players, rarely gets bogged down, fights his way back even from a losing position...and does all this over and over and over and over again!

Having said that, I know one of these three is nearing retirement, the second will lose steam sooner than later and the third will carry on for some more time. The good news is - there are others in the queue to take over from these greats and make the sport better and richer in their own way. These three have renewed my love for tennis and I, with hope, look forward to the up-coming players to fill in really big shoes!