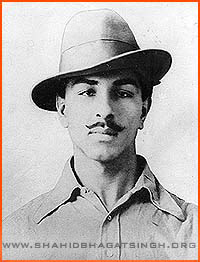 I assumed that a man of your intelligence would know all this already.....But m so glad that u know it now,,,,as i totally understand the Shiver it brings along...

there have been many movies made on Shaheed Bhagat Singh...but in my opinion the most sincerely directed one is "the legend of Bhagat Singh" by Rajkumar Santoshi,,starring Ajay Devgan ,,,with A.R Rahman's music. All of them have done great justice to the direction, music and Acting. MUST waTCH..!!!

Will talk to you about them when i see you :-)

Dude - I am glad that you assumed I was intelligent, but one aspect that you ignored was my past interest levels with pre-independence era!

As for the movies - I don't think they do justice with the person, as he is the infallible HERO in those movies and not so much in this book. A movie is after all a commercial arrangement of facts (that too is not necessary) - where as this book is not a story but a narration of events in the life and trial of this legend!!!

I now plan to get my hands on Freedom at Midnight - let's see as and when I get to read about others that you have recommended...