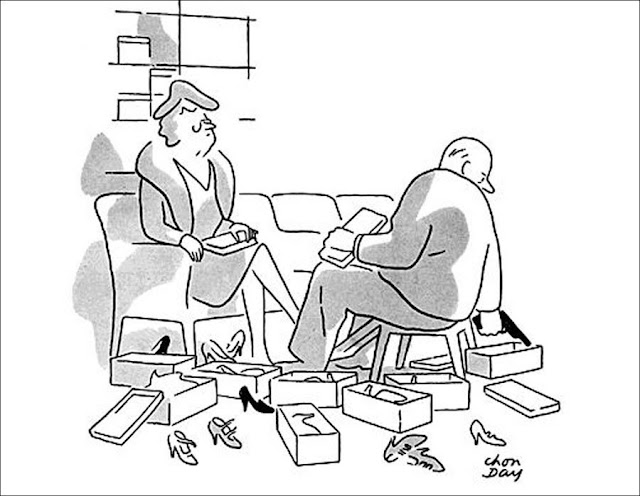 Having been a salesman at the beginning of my career, I used to believe in: (a) a salesman can sell anything and (b) once a salesman, always a salesman! Obviously I was still naive and more importantly a bachelor...now, I most definitely do not believe in (a) at all. My belief changed over a course of time. Having seen closely how women shop for shows, I put women's footwear salesmen quite at top of salesmanship.

The difficulty for women's footwear salesman is hardly in the fact that there are a lot more options available in women's footwear (than available for men) - colour, heel size, style...rather it is in closing a sale with probably the most indecisive customer one ever has to deal with. Their customers are not sure if they want something at all, leave alone what they want. There is simply an interest in customers' mind to see if something 'talks' to them...if they find something new...something interesting...something different...something no one else has...something that being a mere footwear becomes a source of "lift-me-up".

To feel this salesman's woes, please try to understand the simplicity of their customers' thoughts, just as the customer is entering a shoe store. Now complicate things with the sea of options in front of the customer who came in with a simple idea, thus starting a massive tsunami of mental work-out..."purpose it's for (office / comfort / general...) / which dress will it 'go' with / how often can it be worn / is it needed / do I have something similar already / does 'she' have something similar / I saw something similar at half the price there / oh God! I want to buy the entire store" - customers are now deep in thought (a.k.a. confused).

Furthering the salesman's misery is his customers' best understood solution to all their unresolved thoughts (a.k.a. confusion)...try-out more and more, look in the mirror...walk wearing each pair...walk with different styles on both feet...more one tries, more clarity one achieves! Tired after each of his customers have tried out a dozen options...there is no way for the salesman to be sure (still!) if he has managed to close a sale in that entire time (not to mention effort).

I don't know why, but invariably, there are only men I have seen in this role and that further increases my respect for the role of women's footwear salesman - primarily because I couldn't survive a day doing what they do day-in-day-out!
Women's Footwear Salesmen - Respect!