India is In...Indians are Out!

Every time I think of checking my cynicism towards India in general...every time I tell myself that there are improvements that I need to acknowledge...every single time I am let down. I am beginning to better understand that my negativity is not directed towards India as as much as Indians. The general lack of civility and increasing apathy are making us a community of hollow individuals. Unfortunately, it is no longer a matter of my expectations not being met or I am being let down - the problem is much deeper...every single time India is disappointed & let down by Indians!

The recent most incident happened yesterday (Sunday - 29th Sept '13) at the least expected place - Siri Fort Auditorium. I must clarify here - before I write more about last evening – the entire (mis)management was done by an event management company (Rock Castle - their website isn't worth mentioning here) and Siri Fort auditorium had no role in it.

S.F. Auditorium is Delhi's most reputed auditoriums, which also implies some of best events happen here. Since yesterday's event was a ticketed event (fusion musical performance) and judging by ticket prices, most of the people there should have been discerning music lovers. All in all, it promised to be an evening high on energy and entertainment. Unfortunately, problems started right at the entrance gate.

Performance was scheduled to start at 1800hrs and people had started queuing up at around 1700hrs - since there were no seat numbers provided, just blocks - Premier / Gold / Silver. With hundreds in the queue, more joining in every minute - people were not sure why the iron gates hadn't opened and it was already 1740hrs. The eagerly-awaiting-and-now-getting-impatient-audience couldn't have imagined that this was just the beginning of an evening of standing and waiting in queues.

After standing in another queue, this time at the door of the auditorium building (not the main auditorium still) and exchanging heated words with the security staff, people managed to almost break through to enter the building (largely thanks to handful of hot-heads heading the queue). Up until this moment, there was still a concept of queue and some sort of decorum was being maintained.

Beyond this, all of us were subjected to some more ridicule...we had another queue to stand in - this time just outside the main auditorium. Time was already beyond 1800hrs and none of audience members were allowed to even enter the auditorium's sitting area, one can forget about the performances to start on time. The elderly, the differently abled and the rest - all were treated equally. No one could go inside to sir and had to wait, no one was given any reason for this decision.

So far, I was disappointed with one part of Indians - the manager Indian, who fucked up this otherwise reputed auditorium and took away the pleasure of a musical performance by giving the audience such a horrible start to their evening. But - the things that followed not only disappointed me more, but made my cynicism stronger. 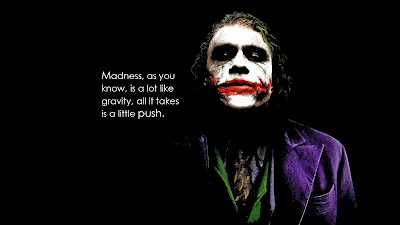 Since there were no seat numbers mentioned on tickets, it was a first come first sit arrangement. Had the management been better, people were informed of the reasons for such delay, some level of humanity was shown towards the elderly and differently abled - things would have been better...but the fact is still that the otherwise considered "discerning audience", turned into a rowdy crowd. Queue became non-existent just as soon as the door opened, and the no-brainer started to happen. People started pushing and shoving, trying to get ahead of as many as they could. That was the end of my trying to lower my cynicism.

I can accept all of this if it was some crazy experiment run by a much milder version of The Dark Knight's Joker. I quote the Joker: "Introduce a little anarchy, upset the established order, and everything becomes chaos" and "Madness, as you know, is a lot like gravity, all it takes is a little push." In this instance, push came from the event management company - the way this entire episode unfolded - it was nothing less than chaos and people did turn into a mad bunch. Joker - 1; People - 0!

India may be the 'in' thing on the world map, but I am not sure if Indians deserve to be...in my opinion, then are out!

India is In...Indians are Out!